Sorry, an error has occurred. Please try again or contact our hotline: service.be@tuicars.com

Enjoy the well-known TUI quality also when booking your rental car! Easier and safer you can not book.

What our customers say:

Unfortunately, no vehicle could be found that matches with your query

Budapest - with about 1.7 million inhabitants, it is the largest city in Hungary and also the capital of the country. This iconic city lies on the Danube and not far away from the cities of Bratislava and Vienna in Austria. Get to know its long history and its cultural treasures.

The name Budapest comes from the once independent cities of Buda and Pest, which were merged in 1873, making it the largest city in Hungary. Until then, Budapest was known as Pest-Buda. Today the beautiful city on the Danube attracts many tourists from all parts of the world. Baroque buildings, old castles and a lot of history await you here.

Budapest Airport (BUD) is only a short distance from the city centre. If you want to hire a car, this is the best place. Alternatively, you can pick up your hire car at a car rental office in downtown Budapest. The surrounding countryside has a lot to offer too. For example, Szentendre, the Royal Palace of Gödöllő or the first capital of Hungary, Esztergom – these and many other fascinating destinations are in easy reach in a hire car.

On either side of the Danube, Buda in the west and Pest in the east, Budapest is a tale of two cities. The Danube is an integral part of the city of Budapest. Since the founding of the capital, old venerable buildings and cultural monuments line the banks of the Danube. On the western side there is Gellért Hill with the Citadella and the Liberty Statue and further north the impressive Budavári Palotam aka Buda Castle on Castle Hill in Várnegyed and on the eastern side of the Danube lie the Parliament Building, the Academy of Science and the National Theatre.

Budapest is a big city and, like in any other city of its this size, you should bear in mind that it also harbours similar risks. For instance, be alert on the Metro, at markets and railway stations. The best time to visit Budapest is in the summer months, from June to September. During this time, the atmosphere on the banks of the Danube is an experience not to be missed. The currency in Hungary is the forint (HUF).

Official travel advisories can always be found on the website of the Commonwealth and Foreign Office - Hungary.

In principle, the highway code in Hungary is very similar to the rest of Europe. However, you should be aware of and comply with the following traffic regulations:

You can find further information on traffic regulations in Hungary here.

After days of sightseeing in downtown Budapest, now is a good time to visit the surrounding countryside. Discover the environs of Budapest by car. For example, you can drive to the village of Szentendre, famous for its baroque architecture, churches, colourful houses and narrow, cobbled streets. The town also boasts a marzipan museum and Szabadtéri Néprajzi Múzeum, an open-air museum with the largest ethnological collection in Hungary. Szentendre lies about 20 kilometres away from Budapest and you can drive there in about 35 minutes along Route 11. You can easily spend all day visiting the sights and enjoying the unique flair of this beautiful village. Sitting directly on the Danube River, it is also a great base for exploring the region. The Szabadtéri Néprajzi Múzeum is well worth taking extra time to visit. You can drive to the “village”, also referred to a Skanzen or Skansen, in about 10 minutes. On the banks of the Danube there is a lovely little path along the river that invites you to take a walk or relax. Afterwards, you can return by car to Budapest. 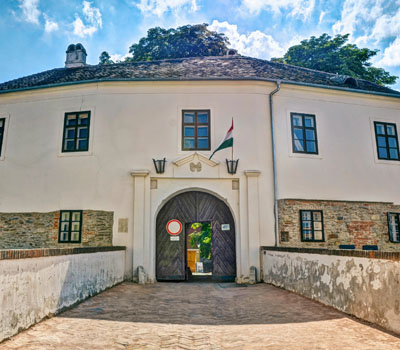 Esztergom - the former and first capital of Hungary and also one of the oldest cities in the country. Visit this popular destination and find out more about the fascinating history of the Árpád dynasty. How to get there by car: About 50 kilometres from Budapest, you reach Esztergom by car in about 60 minutes. Take Route 11 from Budapest and after approximately 12 km you will reach the junction to Esztergom via Dobogókői út. After about an hour you have reached your destination. Follow the signs for "visitor parking” and park your hire car. Now the sightseeing can begin on foot. The Esztergomi Bazilika is definitely worth a visit. Afterwards you can walk to St Stephen's Coronation Statue. St Stephen was the first king of Hungary and was born and crowned in Esztergom. The city was once the seat of an archbishop and at the time the cathedral and the adjoining Primási Palace was the biggest in the country. Visitors marvel at the mediaeval castle on Castel Hill and the huge basilica.